I hope you have gotten off to a great start in 2015 and wish you only the best in this new year.

A quick update here about the release date for Aegis Incursion (Book Two of the Aegis League Series). As you may know, I was initially hoping to launch the novel at the end of 2014. Although the manuscript was completed in early December last year, I realized soon enough (and in discussion with my editor) that some -rewriting would be required to bring you the best read possible. As such, I estimated (incorrectly as it turns out) that the novel would be ready for release at the end of January 2015. Now here we are in the last week of January and as I sit here looking at the manuscript, I am stumped at how I could have misjudged the timeline and the extent of work needed to bring the complex strands of the plot to a satisfying completion! However, with the clarity that I have gained so far, I think I am now able to confidently inform you that Aegis Incursion will be available in March 2015. I am factoring in all of February for the back and forth with my editor till we have the perfect read for you.

I apologize for this delay and would like to assure you that (based on the solid thumbs-up I’ve received from our advance readers) Aegis Incursion will be well worth the wait! Thank you for you patience.

ps: In the meantime please enjoy this excerpt from the book 🙂

Jag Sanchez bolted upright in his bed, gasping for air. As he caught his breath, he stared at the wall ahead, not realizing he was sweating but very aware that every part of him was trembling. He ran a hand over his face and shut his eyes tight.
That voice. That voice had been haunting his dreams for the last nine months, since …
He looked at his phone beside his bed and yelped when he saw the time. Late for school, again. He leapt out of bed and stumbled around his room as he got ready, then grabbed his bag and flew down the stairs toward the front door, not bothering to stop for breakfast. How was it that he lived only five minutes from the high school but was constantly late, even when he put the alarm on?

……..Jag was still jamming his feet into his shoes as he headed out the door. He hurried along the sidewalk that turned up into the school grounds. As he rounded the turn, he stopped short. A group of four guys his age were laughing and sneering at someone on the ground. To one side, a wheelchair had been overturned and the contents of a backpack were strewn over the grass.
When Jag took a closer look at the boy on the ground, his heart sank for a moment before anger overtook him and he made his way over. “What do you think you’re doing?” he growled.
One of the boys, a stocky fellow with a gray ball cap, looked up in surprise. When he saw it was Jag, he smirked. “Hey, look who it is. One of the five Amnesiacs.”
Jag said nothing. He straightened the wheelchair as the undaunted black teenager who’d fallen off it sat up on the ground and glared defiantly up at his intimidators. He got a pat on the head from one of the guys.
Jag saw it and growled again. “Roderick isn’t a dog. Show some respect.”
The one who’d patted Roderick on the head laughed. “Roderick’s a tough guy, he can take a little shoving. You, on the other hand… heh…”
“Don’t test me.”
“Jag, don’t bother,” Roderick said quietly.
“What’s up with you anyway, Jag? You don’t get into fights as much anymore.” The boy with the ball cap lowered his voice and whispered mockingly, “Was it the aliens? Did they take away your urge to fight? The same way they took away your memories of last summer?”
“Shut up.”
“Did they probe you, too?” The boy guffawed, as did his friends.
Jag’s amber eyes were twin flames of anger as he stepped forward. “You’re garbage. You and all the other rats around here have done nothing but harass my friends and me since we came back. If I hear another rotten word coming out of your filthy mouth, I’ll gladly make you eat your teeth.”

– End of excerpt from Chapter One – 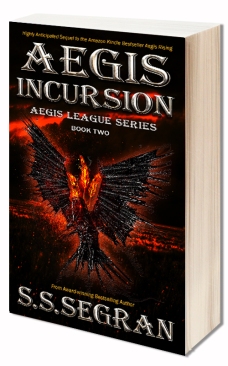